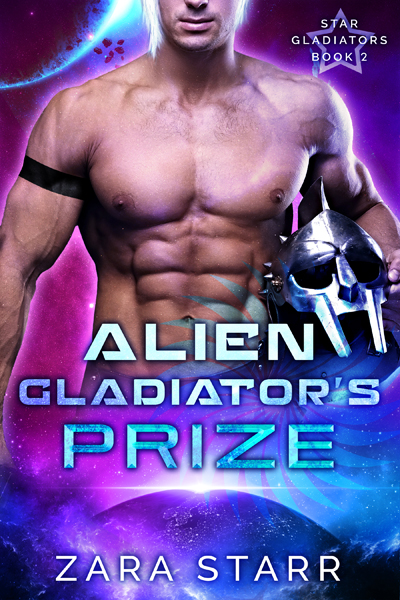 A biologist by trade, Amelia has always been curious about the world around her. She lives to learn and investigate, but those skills are put to test when she’s abducted by intimidating mantis-like aliens.

A cool, analytical approach helps her assess the situation when she is paraded as a prize for the intergalactic gladiator tournament. But she needs a plan to escape.

Enter Gage. One of the front-running gladiators of this season, he’s cocky, confident, and in-control.

Amelia knows what she has to do to get out of this place. But is going with Gage really worth it?

She’s just pretending to fall in love with him… right?

For the first time in his career, he wants to keep his prize…

As a Qai, Gage is accustomed to predicting his opponents’ next moves to take a victory. A former weapons engineer, he has the skills and talent to win this tournament – for the third time in a row.

He’s never been particularly interested in the female prizes, but this time, he can’t get the human female from his mind. She is different from the others. He wants to have her all for himself. He wants to win.

This time, he’s in it for more than just the money.

The female will be his.

Alien Gladiator’s Prize is the second book in the Star Gladiators sci-fi romance series, a scorching hot space adventure featuring an intelligent human woman and a strong, sexy alien who is determined to make her his.