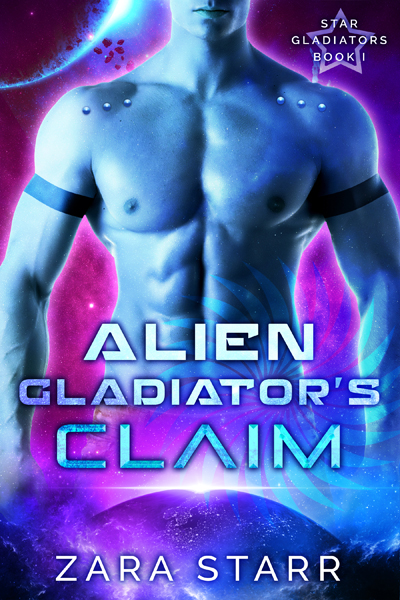 Once a wealthy heiress. Now a human slave.

Tanya’s life has always been eventful. After inheriting one of the biggest companies on Earth, she’s had her hands full. But even she didn’t expect to be abducted by aliens! Before she knows what’s hit her, she finds herself at the center of an intergalactic gladiator tournament – as the prize.

She knows what she must do, but life is different in this strange world. Her status and wealth mean nothing. Her only saving grace may come in the form of a big, intimidating alien gladiator.

Mal is bright blue, deadly in a fight, and irresistibly sexy.

Could he be her chance to escape?

He wants to possess her. Even if it’s forbidden.

As a Karzem, fighting is all Mal has ever known. He’s served many Saithin Masters in the gladiator tournaments, and his new Master counts on him to win.

Mal is determined not to disappoint him, but when he sees the grand prize of the tournament, his instincts fail him. The female is unlike anyone he’s ever seen. Her strong spirit intrigues him and now, more than ever, he wants to win.

There’s just one major problem. If he wins, she will belong to his Master.

He can’t let that happen. Tanya is his.

He will do anything to possess the feisty little human.

Alien Gladiator’s Claim is the first book in the Star Gladiators sci-fi romance series, a scorching hot space adventure featuring a daring human woman and a strong, sexy alien who will do anything to make her his.