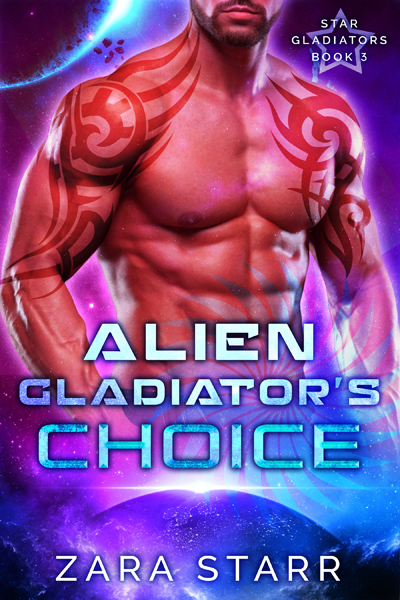 She’s just become part of the biggest scoop of her career – a million miles from Earth!

As a local reporter, Dani’s always at the forefront of any investigation. When women start disappearing in her town, she searches for answers. She just didn’t expect to go missing too!

She finds herself on a strange planet – as a prize in an intergalactic gladiator tournament.

A huge, red-skinned gladiator catches her eye, and Dani immediately knows that she wants to be chosen by him.

But Alothrax is just as much of a prisoner as she is.

Is there any hope for freedom? Or is she doomed to a life of slavery, far from Earth?

She makes him want to risk everything…

Alothrax must repay his family’s debt. Ever since his parents made a deal with the Saithin, he’s been stuck fighting as a gladiator. He hates what he does and he hates the Saithin, but the threat to his family’s safety keeps him in the arena.

It isn’t until he wins a strange human female that he starts to wonder whether there could be more.

Dani is different from anyone he’s ever known. She’s beautiful, intelligent, and determined to gain her freedom. She sparks a new fire inside him. One that desires the freedom she speaks of – and her.

But can he risk his life and his family for one female?

Alien Gladiator’s Choice is the third book in the Star Gladiators sci-fi romance series, a scorching hot space adventure featuring a curious human woman and a strong, sexy alien who will do anything to protect her.