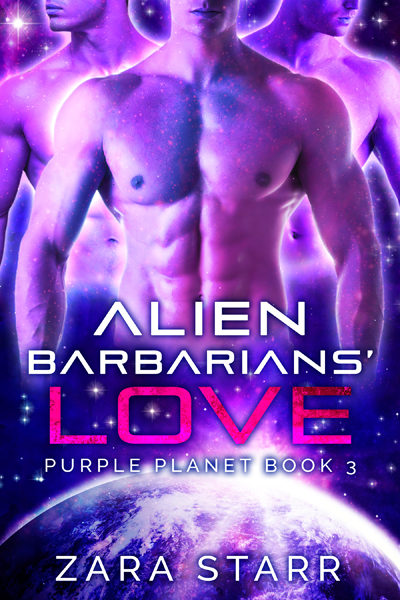 Anywhere is better than at home… unless it’s an alien planet!

Running from her abusive boyfriend, Lila doesn’t care about the interdimensional storm raging outside, the dragons that have been sighted on Earth, or the fact that people have gone missing in the storms. She grabs her dog, runs outside… and gets struck by a lightning that transports her to a world with giant, purple alien barbarians! Should she have stayed at home after all? When the aliens start courting her, she gets even more concerned. Men are all violent brutes. Except maybe these brutish alien barbarians are actually kinder than some human men…?

Alien Barbarians’ Love is the third and final book in the Purple Planet sci-fi reverse harem romance series! Each book is a standalone romance featuring a different woman and three hot, purple aliens who want her as their mate. No cheating, no cliffhangers, and a HEA!